The amount of work that has gone into making this beautiful piece of golden cloth is mindblowing. [via]

A unique piece of golden yellow silk brocade cloth, woven from spiderwebs, is on display at the Museum of Natural History in New York. To harvest enough silk to make the cloth, more than a million female golden orb spiders were collected in Madagascar, “milked” for silk, and released back into the wild. The golden spider silk was woven by Malagasy artisans into lamba Akotifahana, a type of brocade that is traditionally reserved for the aristocracy; the entire process took 4 years.

Now this is the sort of extraordinary extravagance that you’d expect of billionaires such as Roman Abramovich.

The ecological disaster that is dolphin safe tuna is a shocking piece of science journalism that took second place in The 3 Quarks Daily 2009 Prize in Science. [via]

He quotes the following bycatch rates from here (a broken link to what looks like a Powerpoint presentation).

Ten thousand sets of purse seine nets around mature yellowfin swimming in association with dolphins, will cause the deaths of 4000 dolphins (0.04 percent of a population that replenishes itself at the rate of two to six percent per year); 70,000 small tunas; 100 mahi mahi; 3 other small fish; 520 billfish; 30 other large fish; and 100 sea turtles. No sharks, no wahoo, no rainbow runners, no yellowtail, and no triggerfish and dramatic reductions in all other species but dolphins.

By trying to help dolphins, groups like Greenpeace caused one of the worst marine ecological disasters of all time. Few other fisheries are as bad for groups like sharks and sea turtles as the purse seine fishery, and none are as large in scale.

This is entirely disingenuous because it suggests that there are only two methods of catching tuna both of which use purse seine nets and that the dolphin friendly usage of purse seine nets is the ecologically worse of the two.

Greenpeace in fact advocate ditching the use of purse seine nets entirely and catching tuna (plus other commercial species of fish) with pole and line methods and many major British retailers are in line with this thinking.

There is a brilliant new documentary called The End of the Line that is currently on limited release in the UK that explains these issues in far greater detail than I can here or pick up the book by Charles Clover that the film was based on (available at Amazon US or UK).

This amazing simulation of a spider is both cool and pretty creepy (you can place flies for it to scuttle over and eat).

Also it reminds me of what I think is my only phobia – the fear of giant spiders. I couldn’t find a term for it anywhere so I’ve coined Gigantarachnophobia.

I have no problem with spiders generally but once they get to be the size of a cat or larger then we enter phobia territory. Thankfully as long as I keep away from the jungle of The Congo I don’t think I’ll ever encounter a spider big enough to be scared of. And even then I don’t think the J’ba fofi as the Baka people call them really exist.

There have been two reported cases of Komodo dragon “virgin births”

The largest lizards in the world are capable of “virgin births”.

One of the reptiles, Flora, a resident of Chester Zoo in the UK, is awaiting her clutch of eight eggs to hatch, with a due-date estimated around Christmas.

Kevin Buley, a curator at Chester Zoo and a co-author on the paper, said: “Flora laid her eggs at the end of May and, given the incubation period of between seven and nine months, it is possible they could hatch around Christmas – which for a ‘virgin birth’ would finish the story off nicely.

“We will be on the look-out for shepherds, wise men and an unusually bright star in the sky over Chester Zoo.”

receive the Special Recognition Award for his lifetime achievement in bringing the wonders of the natural world to British TV screens over the past five decades.

He is a wonder of the natural world himself as he really does not look anywhere near the 80 years he has lived. I have always loved the many series of nature documentaries I have seen in my life presented by Sir David Attenborough and he really is in my opinion the Greatest Living Englishman.

Then from the sublime to the ridiculous he was followed to the stage by Peter Andre and Jordan who were there to present the award for Most Popular Serial Drama.

The Montgomery Advertiser reports that gigantic Yellowjacket nests have started to appear across the southern two-thirds of the US state of Alabama.

Specialists say it could be the result of a mild winter and drought conditions, or multiple queens forcing worker yellow jackets to enlarge their quarters so the queens will be in separate areas. But experts haven’t determined exactly what’s behind the surprisingly large nests.

Auburn University entomologists, who say they’ve never seen the nests so large, have been fielding calls about the huge nests from property owners from Dothan up to Sylacauga and over into west-central Alabama’s Black Belt.

One of the larger nests to have been discovered is one that has engulfed the interior of an abandoned 1955 Chevrolet. 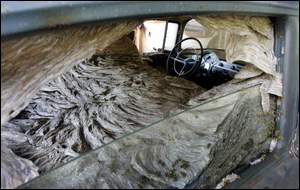 It’s like the start of an awful B-Movie come to life in which animals act outside of their usual behaviour and become a threat to humans. Where’s Samuel L. Jackson when you need him?

Real wild Squirrels with real vintage cameras.
No computer editing on any of the shots. 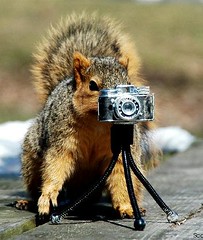 Barley Squirrel Lines Up A Shot
Originally uploaded by SQUIRREL400.

Wrote about how the physics of modern computer games really do allow some wonderful things to be created by players yesterday.

But artificial biology in computer games shouldn’t be forgotten as can be seen in this wonderful ecosystem created by Laukosargas Svarog within the environment of Second Life.

The result of a year’s work, Laukosargas Svarog’s island of Svarga is a fully-functioning ecosystem, adding life or something like it to the verdant-looking but arid palette Linden Lab offers with its world. It begins with her artificial clouds, which are pushed along by Linden’s internal wind system.

“If I was to turn off the clouds the whole system would die in about six hours,” she tells me. “Turn off the bees and [the plants stop] growing, because nothing gets pollinated. And it’s the transfer of pollen that signals the plants to drop seeds. The seeds blow in the wind, and if they land on good ground according to different rules for each species, they grow when they receive rain water from the clouds. It’s all interdependent.”

Of all the amazing things created within Second Life I think this stands out.