Bruce Schneier is discussing his latest book Liars and Outliers on The WELL.

The discussion is still open for the next couple of days but has been very enlightening so far. I particularly like the notion of cooperators and defectors to describe individuals in relation to systems.

I’m a great fan of Schneier’s writing and how his analyses has grown beyond that of computer security to the fundamental notion of what security is and how group within societies embrace or reject aspects of it.

London has begun a two-day international conference focused on the threat from cyber-security attacks.

Representatives of 60 nations gathered to discuss how to tackle the rising levels of cyber-crime.

I hope when they discuss cyber-crime that they aren’t focusing on intellectual property because the actual financial cost of copyright infringement as opposed to the trumped up figures given by the media pales in comparison with the real costs of cyber-crime such as fraud and identity theft.

So you’ve decided you want to drop off the map and leave Big Brother behind. It’s harder than ever in our always-connected world, but if you’re ready to plan your big vanishing act, here are a few tips to get you started.

How to Disappear: Erase Your Digital Footprint, Leave False Trails, and Vanish without a Trace by Frank M. Ahearn and Eileen C. Horan gives the low down on disappearing and starting your life over.

Bruce Schneier thinks that Outsourcing data processing to an Indian Jail is a security risk.

I’m very much inclined to agree, especially given this.

The unit, which is expected to undertake back-office work for banks, will work round the clock with three shifts of 70 staff each.

Help! My Gmail and Facebook accounts have been stolen and the passwords changed. Someone I know just called to tell me that he got an email saying that I’m in London in a hospital and need money immediately. What do I do?

Firstly report the fact that your account has been hacked to Facebook and Google using the following links.

Next notify any close friends or family that your accounts have been hacked and to ignore any pleas to send money.

If you get your accounts returned I recommend using http://strongpasswordgenerator.com to create a new password.

With the rise of the internet nation states have begun to lose control of their citizens and have introduced ever more draconian laws to try and claw some of that control back.

The War on Terror was framed as a Cold War for the 21st Century and a fog of fear was spread over the population but that fog gradually lifted as people realised that they were not at risk from Al Qaeda. Even when a nutcase tried to ignite explosives in his underpants on an aircraft and politicians and the news media spewed rhetoric about this dangerous new tactic of the terrorists and how something had to be done most people soon went back to their lives as if nothing happened.

The powers that be needed a new threat with which to control the people and the Chinese hacking of Google and others provided them the framing to do it.

Western civilisation is now under the peril of being destroyed by China in the form of computer hackers.

Google’s allegation that Chinese hackers infiltrated its Gmail servers and targeted Chinese dissidents proves the United States is “losing” the cyberwar, according to McConnell.

But that’s not warfare. That’s espionage.

We do not need as Mike McConnell to ‘reengineer the Internet to make attribution, geolocation, intelligence analysis and impact assessment — who did it, from where, why and what was the result — more manageable.’

The ‘Google hacking situation’ was first and foremost the infiltration of the servers of private industry not an attack on the United States itself. The IT security of American companies is an issue where the US government can be of assistance by offering advice or notifying of specific threats that they’ve become aware of, but not through monitoring and controlling the internet. 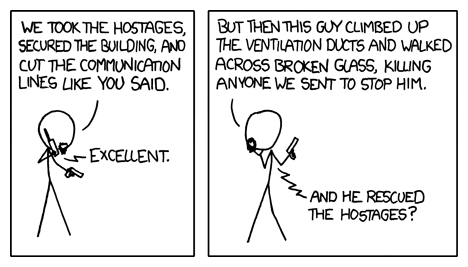 I’m intrigued by this story of extortion of gamers via their reputation in The Sims Online. [via]

Good explanation of the pitfalls of systems that employ negative public karma.