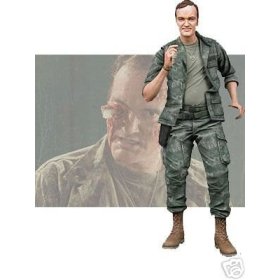 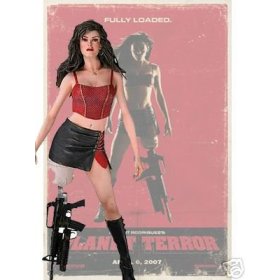 What was already a strange new story about a woman crashing her car into a DMV office that she’d been summoned to in order to take her driving test is pushed over the edge into the truly wonderfully bizarre by the following line.

Inexplicably, a man in a Superman costume could be seen walking around the car, but he did not stop to help the driver or any of the victims.

I guess there was a more critical emergency he had to attend to at that moment like a collapsing dam or something.

I read at the weekend in Empire magazine that the production of the movie adaptation of Alan Moore and Dave Gibbon’s classic graphic novel Watchmen is back on.

The producers clearly have a lot of respect for the material but they simply cannot have an understanding of why it works so well if they believe they can turn it into a movie.

I think it is basically unfilmable as it is impossible to capture the essence of it in any other form that that for which is was written.

They will no doubt be able to get the basic story on celluloid but what makes the comic so great will almost certainly be lost.

I was trying to explain it to my brother and it is basically that there are certain pieces in various different media that in transferring from one medium to another would lose their essence.

Un Chien Andalou for example could not possibly work as a short story.

The words of Zack Snyder director of 300 who has also been lined up to direct Watchmen give me some comfort.

I want to make this movie, it’ll be awesome to make it but I need to be convinced that it will be worth making, that we have respect for the thing. I’m going to wait and see right now – I’m the biggest sceptic!

But don’t read too much into that – the hope is to start filming next year, once the screenplay has been cracked. “I haven’t seen anything yet that makes me think that we’re any closer to it,” added Snyder. “Everyone says ‘I respect the source material’ but I think what Hollywood misses and what we need to think about is what is the book about? What does it mean? It’s easy to get caught up in the mechanics of the script and the mechanics of the movie.

I believe that it might be possible to make a wonderful adaptation of Watchmen but I have no idea how that can be accomplished and have no faith that anyone will be able accomplish it.

It would I believe require complete deconstruction of it and then for it to be utterly rebuilt from the ground up with the narrative techniques that are unique to comics replaced with some film making techniques.

Watchmen is an analysis of what it is to be a superhero but also a deconstruction of what comic books about superheroes are. Perhaps a movie version could be a deconstruction of superhero movies in some way. I’m still not convinced that we are going to get anything like that, this will probably be yet another awful adaptation of a Moore comic but there is a one in a million chance that it might be a movie masterpiece.

Tom Tomorrow has produced a really excellent page of This Modern World today. 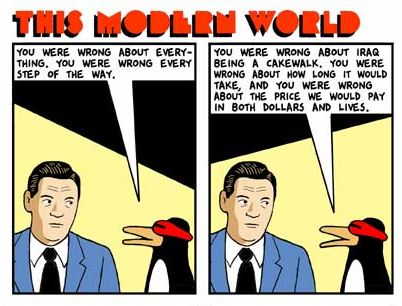 The rest of it can be read here.

faces controversy and accusations of copyright infringement over his latest work Lost Girls.

Moore not only faces criticism for the pornographic content of the graphic novel but also because Great Ormond Street Hospital maintains that it holds the copyright for the character of Wendy Darling from Peter Pan, who is one of the main charcters in Lost Girls.

But is Peter Pan in the public domain and if it isn’t are the characters copyrighted. Never Neverland: Peter Pan and perpetual copyright

Alan Moore discusses Lost Girls and the issues surrounding it in this BBC Radio interview.

Neil Gaiman has written in his online journal about Lost Girls.