The cinema hosted Michael Eavis on monday for a screening of the documentary movie Glastonbury which he introduced for us. To advertise this screening the following photo featured in the Bath Chronicle newspaper. 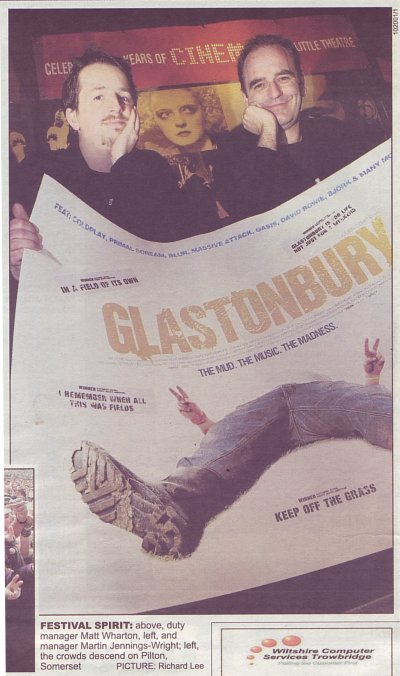 We look bored as hell but that’s how the photographer wanted us.

Tarmle imagines the future of cinema-going in Burnoff: Part 1 – The Bad Guys Win

Going to the movies is not what it used to be. Security at the studio-owned theatres is heavy, it’s not a trip to be taken lightly. But if you want to see the film everyone is talking about without waiting a year for the home release, you have little choice. When you enter the lobby the first thing you see are long ranks of tiny, thumbprint activated lockers. This is where you must leave all of your electronics, your personal server and peripherals, even your watch, and you had better not be wearing smart spectacles or contacts.

I don’t see the real future being like that but I think the future does look bleak for cinemas.

Mark Cuban asks What Business are theaters in ?

I think Cuban makes great points. Cinema owners need to embrace the changes in the industry and innovate and possibly diversify, create an environment that people want to experience. Going to the cinema should be more than just a chance to see the latest blockbuster. Because if the only competitive advantage cinemas can offer is that of seeing the movie first then they’ve already lost because ‘pirates’ are always going to find a way to videotape the movie.

The hyper-secure cinema that Tarmle imagines will never work because customers will simply not put up with it. They might put up and shut up when it comes to the ridiculous restrictions placed upon them in order to take a plane flight but they will draw a line when it comes to their entertainment.

The cinema and movie industry need to embrace a world where if you missed it in the theater today you could see it on DVD tonight.

The lead time between the theatrical release and the DVD release has shrunk to only a few months now in many cases that I think there is an argument to be made that they should go the whole way and have simultaneous releases.

However before that they need to get on board with simultaneous worldwide releases and get rid of the DVD region system. With some movies getting released on DVD in the US before they even hit cinemas in the UK they have undermined their own business model. They argue that piracy is killing the industry but they are fueling it by having staggered releases as the globalising effect of the internet means that the US release of a movie creates an instant desire to see the movie in the rest of the world. This desire to see the movie is not being satisfied by the official release as that might be months off so the consumer turns to the pirates that can satisfy the desire with a dodgy looking video that was taped in an American cinema.

The Waiter had to deal with a real asshole at the restaurant recently, and as usual he dealt with this dickhead of a customer with aplomb.

I really don’t understand people like this, he probably had been having a great meal out and then he has to ruin his own night and everyone else around him but acting like a wanker because he feels a little aggrieved. When it turns out that the customer was in the wrong all along he doesn’t come back and apologise no he returns and accuses our man of being an asshole himself.

I’ve had to deal with tossers like this gentleman at the cinema, narrowly avoided being assaulted by one guy a few years back. Most aggravation comes due to shows selling out especially when there has been long lines of people waiting to get in as people will have been waiting ages only to discover that the show has become sold out.

I can understand that they would be disappointed but what can I do it’s not my fault that we’re busy because we have the latest must-see movie and that you failed to book a ticket. But invariably there will be one guy and it is virtually always the men that will take their frustration and disappointment out on our staff members. This has not been so much of a problem the last 18 months or so because we’ve had far fewer busy shows and now that we have an internet booking system plus additional computer stations to take advance bookings people can no longer claim that they tried to book but couldn’t get through to us.

Most of the problems we have been having lately is due to the increased complexity of our programme because we have started to add special showings such as shows for senior citizens, parents with babies, late night screenings or one off screenings of classic films. This means that the times can vary from day to day for our regular programme of the latest releases.

Unfortunately this means that we get customers for screenings that aren’t actually happening on that particular day plus it doesn’t help when our marketing department is cocking things up and advertising shows that we don’t have as well.

So far less assholes recently but still the same number of complaints.

We had a very amusing mixup recently that thankfully my boss got to deal with as he was working at the time. Two old ladies who had obviously not been to the pictures in years came to see Mrs Henderson Presents and then has apparently wandered into the balcony of Screen 1 instead of continuing up the stairs to Screen 2.

So they sat and watched the entirety of March of the Penguins and then watched as the lights went up and saw the audience that had been sitting below them all get up and leave and then saw my boss go in and check the screen and clear up the rubbish left by the audience and all the time they are sitting waiting for Mrs Henderson Presents to start. Quite by chance my boss happens to see them on the balcony as he looks up towards the projection box window which is situated behind these ladies and so he leaves the stalls and goes up the stairs to investigate who these ladies are.

Whereupon he discovers their mistake and has the unfortunate duty now to inform them that they have missed all but the last fifteen minutes of the movie that they had come to see. They are quite irate and are blaming everyone but themselves for the error and will not even take up the offer of the free tickets for the later performance that day for Mrs. Henderson. They were under the impression that the penguin film was the support feature for their film even though support features haven’t been played for decades. They also managed to miss all the very visible signs indicating which movie was playing in which screen and where each screen was.

It’s not like it hadn’t crossed our minds that customers may go through the door to the screen 1 balcony instead of continuing a bit further to find the door to screen 2 so that’s why there is a huge sign pointing the direction to screen 2 and a very noticeable sign on the balcony door saying ‘Screen 1 balcony’. The tickets are marked with the relevant screen number. What more can we fucking do?

Enough ranting about cinema customers for now I’ll go back to ranting about infringements on civil liberties or something else tomorrow.

In the ongoing low level battle between the cinema I work at and the local ‘multiplex rival’ they have finally struck a blow by offering OAPs on weekday evenings which is something we don’t do as we only offer a discount before 6pm.

I’ve lost count of the number of complaints by OAPs who now aware of the difference are insisting we should give them a discount in the evening also or they might stop coming to see films here.

Stupid bloody old people don’t realise that as our prices are across the board less than the ‘multiplex rival’ that we are the cheapest cinema for all but the few shows that take place in the evenings on weekdays, which are the shows least attended by OAPs anyway as most of them come during the morning or afternoon.

It’s not like they don’t get a great deal from us already. We do two screenings a week especially for seniors where they get very cheap entry plus a free cup of tea and biscuit. Also they could for only £15 per year become members and get two free tickets plus have their precious discount at all times. It’s not as if they can even claim to ‘Have fought a World War for us and is this all the respect we get’ as most of them would have been young children in the early 1940s.