As dark as True Detective is in tone it is contrastingly brilliant in the ideas it is exploring. It is much more than just a tale of two detectives hunting a killer over the course of 17 years, it’s an exploration of nihilistic thought and what it means to be a man.

There has been a lot written about True Detective since the first episode was broadcast with wild theories of where the show is going and the identity of The Yellow King and speculation over whether Rust or Marty are involved in the murder in 2012 that has similarities to the case of Dora Lange. I don’t feel like the mystery is the point of the show, this isn’t Lost nor is it an Agatha Christie where the point of the story is uncovering the killer.

Amidst all these speculation are some interesting pieces about the show and other works that have influences on it. The following are I think some of the better articles about True Detective..

5 things to drop into conversation to make you sound smart while talking about ‘True Detective.’

1. “Obviously, you can’t truly appreciate ‘True Detective’ if you’re not familiar with Robert W. Chambers’ ‘The King in Yellow.'”

2. “You realize, of course, that Ledoux and Cohle’s ‘Time is a flat circle’ metaphor is all borne out by String Theory.”

3. “I take it you realize that Rustin Cole’s depressing world view is based upon the antinatalist-nihilist writings of Thomas Ligotti and E.M. Cioran.”

4. “I was pleasantly surprised to see a reference to John Money’s ‘paraphilic lovemap’ pop up in the first episode. Weren’t you?”

5. “Did you happen to notice that True Detective went meta when it broke the fourth wall on Sunday?”

In addition to the more obvious literary influences such as Robert W. Chambers’ ‘The King in Yellow’ and the writings of Thomas Ligotti there are comic book influences particularly some of the works of Alan Moore and those of Grant Morrison, GeekRex analyses them here.

I love the graphical tribute to True Detective at We keep the other bad men from the door by Nigel Evan Dennis. 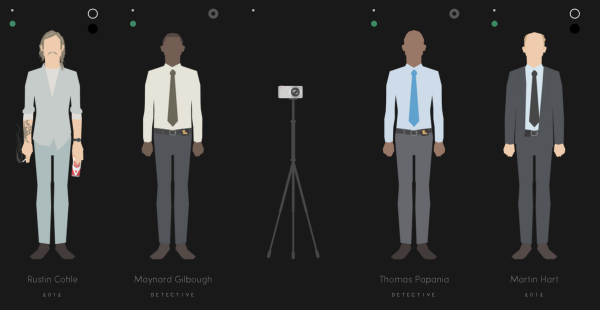 Pasha Malla writes in Slate: A World in Which Nothing Is Solved – True Detective is not really a whodunit. It’s an exploration of storytelling.

Grantland in their article ‘True Detective’ Precap: A Million Yellow Kings Dancing on the Head of a Pin discuss the mysteries presented in True Detective and the tendency for viewers who gripped by mystery in TV shows will then overanalyse the minutest details.